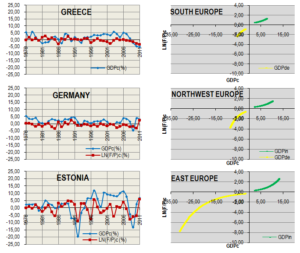 The objective of this Diploma Thesis is to investigate the effect of annual GDP changes on annual changes in road fatalities in the European Union. For this analysis a database containing GDP per capita, road fatalities and population data for the EU member states for the period 1975-2011 was developed. Linear Mixed Models were developed and applied for all European countries tested and also for the different groups of countries that were selected (Northwest, Northern, Eastern countries). The results led to the conclusion that an annual increase of GDP per capita leads to an annual increase in fatality rates, whereas an annual decrease of GDP per capita leads to an annual decrease in fatality rates. Moreover, in the case of Northwest countries, a time-halo effect of the impact of annual GDP decrease to the road fatalities was found to be significant.