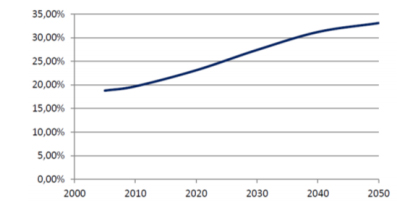 This paper presents the findings of an in-depth analysis of infrastructure related risk factors and interventions specific to the road safety of the elderly conducted in the framework of the ElderSafe project, funded by the European Commission DG MOVE. The infrastructure areas considered include highway design, urban and rural roads, traffic control at junctions, road lighting, route guidance and signs. The findings suggest that several interventions in road design have the potential to improve safety of elderly road users, however, only a few seem to address the most critical risk factors of elderly people. The most promising interventions identified include: separation of vulnerable road users from motorized traffic and/or introduction of low design speeds in areas with many vulnerable road users (VRU), the development of self-explaining and forgiving roads in urban and rural areas, the reduction of conflicts between VRU’s and vehicles and between vehicles at urban intersections, the use of protected-only operations at signalized intersections, and the development of standards in the area of age-friendly road design.