Yannis G., Papadimitriou E., Papathanasiou E., Postantzi E., “Impact of Mobile Phone Use and Music on Driver Behaviour and Safety by the Use of a Driving Simulator”, Proceedings of the 3rd International Conference on driver distraction and inattention, Chalmers University, Gothenburg, Sweden, September 2013. 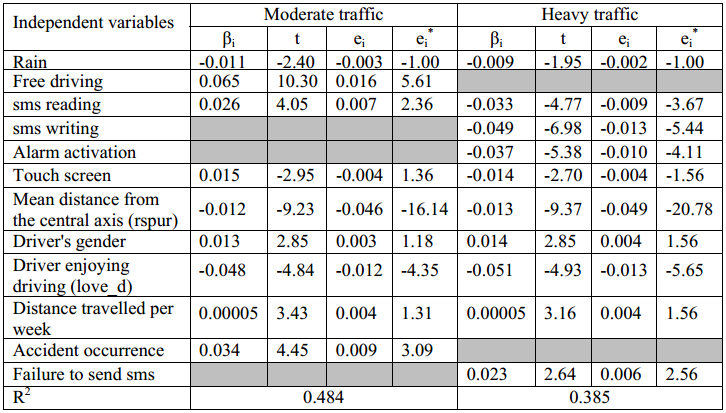 Texting while driving seems to be a widespread behaviour, which has been associated with a non negligible proportion of road accidents, especially among younger drivers. The impairment of the driver’s behaviour and the related risks may be increasing on motorways, if we take into consideration the fact that there are high vehicle speeds and the necessary reaction time is decreased. This research aims to investigate the impact of texting on young drivers’ behaviour and safety on motorways. On this purpose, a driving simulator experiment was carried out, in which 34 young participants drove in different driving scenarios. Lognormal regression methods were used to investigate the influence of text messaging as well as various other parameters on the mean speed and the mean headway. Binary logistic methods were used to investigate the influence of texting and other parameters on the probability of an accident. The models’ application showed that texting leads to statistically significant decrease of the mean speed and to increased headway in normal and in specific conditions on motorways. Simultaneously, it leads to an increase of accident’s probability, probably due to increased reaction time of the driver in case of an incident.