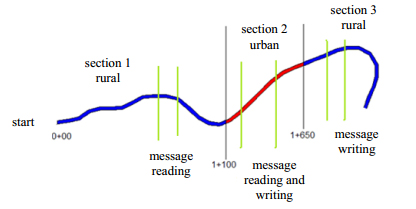 This research aims to investigate the impact of texting on the behaviour and safety of young drivers in urban and rural roads. In order to achieve this objective a driving simulator experiment was carried out, in which 34 young participants drove in different driving scenarios. Specifically, driving in good weather, in raining conditions, in daylight and in night were examined. Lognormal regression methods were used to investigate the influence of texting as well as various other parameters on the mean speed and mean reaction time. Binary logistic methods were used to investigate the influence of texting use as well as various other parameters in the probability of an accident. It appears that texting leads to statistically significant decrease of the mean speed and increase of the mean reaction time in urban and rural road environment. Simultaneously, it leads to an increased accident probability at incidents, due to driver distraction and delayed reaction at the moment of the incident. It appeared that drivers using mobile phones with a touch screen present different driving behaviour with respect to their speed, however, they had an even higher probability of being involved in an accident in case of an incident. The analysis of the distracted driving performance of drivers who are texting while driving may allow for the identification of measures for the improvement of driving performance e.g. restrictive measures, training and licensing, information campaigns etc.