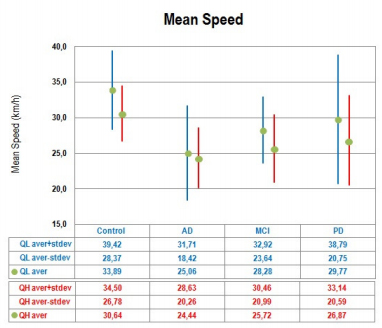 Driving requires possessing sufficient cognitive, visual and motor skills and drivers must have adequate motor strength, speed and coordination. Perhaps more importantly, cognitive skills including concentration, attention, adequate visual perceptual skills, insight and memory need to be present. The normal ageing process leads to declines in these motor and cognitive skills, and when combined with a cerebral disease, it may significantly impair the person’s driving performance. The objective of this paper is the analysis of driving behaviour of drivers with cognitive impairment due to various brain pathologies, in urban areas, using a driving simulator. An experiment with three assessments for healthy and impaired drivers is carried out: a medical/neurological assessment, a neuropsychological assessment and a driving simulator experiment, in which participants drive in urban area in low and high traffic volumes, and thus, the driving performance of the two driver groups can be analysed. More specifically, the brain pathologies examined include early Alzheimer’s disease (AD), early Parkinson’s disease (PD), and Mild Cognitive Impairment (MCI) and the vehicle control measures examined are both longitudinal and lateral (speed, lateral position, space headway, reaction time at unexpected incidents, accident probability). So far, 97 participants (out of which 35 impaired) have completed the experiment and the results suggest that there are significant differences in the driving performance of healthy drivers and drivers with cognitive impairments. Impaired drivers appear to drive at slower speeds, tend to drive to the right border of the road, have higher mean headways, react slower at unexpected incidents than the healthy ones and are more likely to get involved in an accident. More specifically, AD and PD drivers seem to have increased accident probability in high traffic urban environment and cannot adjust their driving behaviour in different driving conditions.