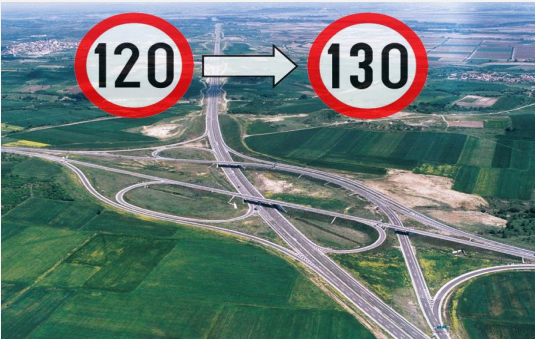 The objective of this research is to investigate the impact on road safety of increasing the speed limit on motorways from 120 to 130 km/h in June 2007. In order to achieve this objective, data was collected concerning road accidents on motorway sections Athens – Thebes and Athens – Tripoli from the database of Department of Transportation Planning and Engineering of the N.T.U.A. with data from the Hellenic Statistical Authority and on sections of the Egnatia Motorway from Egnatia Odos S.A. for the period 2005 – 2010. For the investigation, a “before” and “after” statistical analysis of accidents with large control group is used with X2 and odds ratio controls, with the selected control groups consisting of the entire interurban network and all the national roads of the country. The application of the methodology indicates a statistically significant increase in the number of deaths in the section Athens – Thebes a year after raising the speed limit, possibly due to the increase of the speed limit, and then ceases to be statistically significant, probably due to improvements made to the infrastructure. In the section Athens – Tripoli a reduction in accidents and victims is indicated probably due to improvements in the infrastructure while in the Egnatia Motorway there is no statistically significant change possibly due to the high geometrical characteristics of the road which can satisfy the higher speed limit.