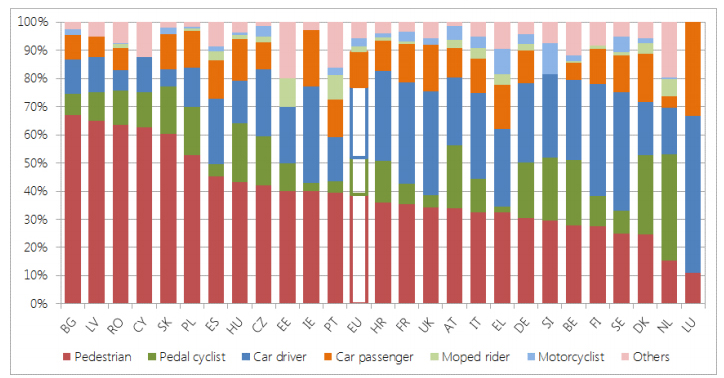 Due to their greater fragility, the elderly are more likely to be seriously injured inany given accident than younger people. In 2010 6.563 elderly people werekilled in traffic accidents in 24 European Union countries, constituting 22% ofroad fatalities of all ages. Although the number of elderly fatalities has decreasedby 30% between 2001 and 2010, the overall fatalities number has fallen fasterand the proportion of elderly fatalities has tended to rise. The objective of thisresearch is the analysis of basic road safety parameters related to elderly people(> 64 years old) in European countries through the use of the EU CARE databasewith disaggregate data on road accidents, as well as of other international datasources (OECD/IRTAD, Eurostat, etc.). Time-series data from 24 EU countriesover a period of 10 years (2001-2010) are correlated with basic safetyparameters, such as road type, season of the year, age and gender. Data fromthe EU Injury Database are used to identify injury patterns and improve theassessment of injury severity, and additional insight into accident causation forelderly drivers and riders is offered through the use of in-depth accident datafrom the EC SafetyNet project Accident Causation System (SNACS).The results of the analysis allow for an overall picture of the safety level ofelderly people in Europe, providing thus useful support to all decision makersworking for the improvement of safety of the elderly in the European roadnetwork.