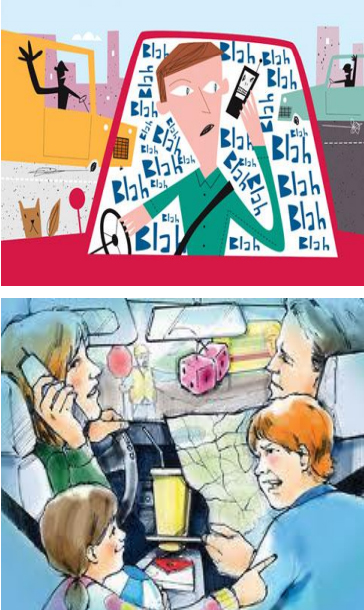 The objective of this research is the analysis of the driving performance of drivers from different age groups, while talking on the cell phone. For this purpose, a large driving simulator experiment is carried out, in which 72 drivers from three different age groups (young, middle aged and older) were asked to drive under different types of distraction (no distraction, conversation with passenger, cell phone use) in rural and urban road environment, in low and high traffic. To achieve the objectives set out in this paper, an appropriate staged modelling methodology has been developed, comprising exploratory components, such as boxplots and other descriptive statistics, and generalized linear mixed models for the investigation of the effect of cell phone use, age group, area type and other variables on traffic speed and space headways. Results indicate that the cell phone use while driving leads to reduced speed for all drivers especially in urban areas. In particular, regarding the driving performance of different age groups, older drivers reduce their speed by twice as much as middle aged drivers. This distraction is also reflected in increased space headways associated with cell phone use for all drivers. The increase is more pronounced on older drivers who intend to keep more than 5 times higher distance from the vehicle in front than middle aged drivers. Cell phone use results in lower speeds and higher space headways, suggesting a driver’s compensatory effect, also identified in previous research. Although it can be assumed that the results are generally correlated with lower accident risk, they reveal, apart from the physical distraction of the handheld mode, a systematic attempt of drivers to counter-balance the increased mental workload resulting from the conversation.