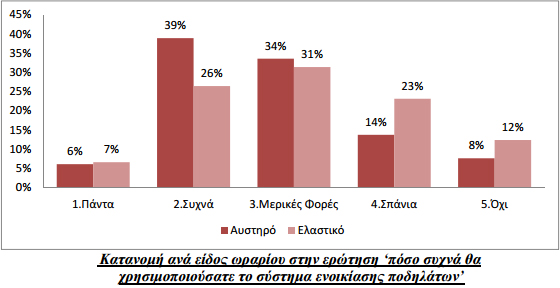 The objective of the present research is the analysis of the characteristics influencing the use of a bicycle sharing system in Athens. The necessary data were collected through an on-line survey to a sufficient sample of commuters and residents of the Municipality of Athens and the stated preference method was used for various scenarios of cost, time and comfort. A logistic regression mathematical model was developed describing travellers’ behaviour based on the characteristics of the travellers and their journeys. Both multinomial and mixed logit models were developed. From this analysis it was derived that the probability for a traveller using bicycle instead of passenger car or public transport depends on travel time, cost and comfort level, along with the age and the gender of the traveller.