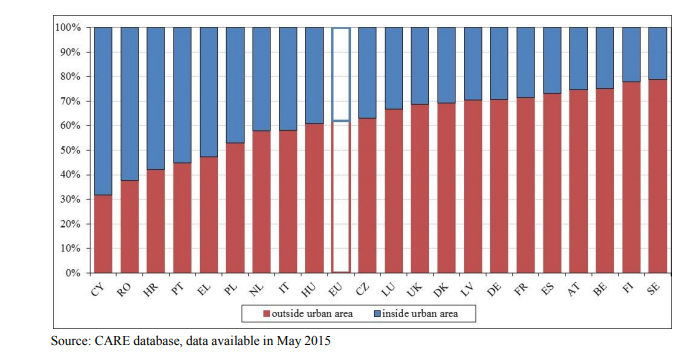 More than 135.000 people were killed in traffic accidents on roads inside urban areas in the 27 European Union countries between 2004 and 2013, representing 38% of all road accident fatalities in those countries. The objective of this research is the analysis of characteristics of road accidents inside urban areas in European countries through the use of the EU CARE database with disaggregated data on road accidents, as well as of other international data sources (Eurostat, OECD/IRTAD, etc.). Time-series data from 27 EU countries and 3 EFTA countries over a period of 10 years (2004-2013) were correlated with basic safety parameters such as mode of transport, presence of junction, seasonality, road user type and personal characteristics like age and gender. During this period an overall decrease of almost 42% in road accident fatalities inside urban areas was recorded, however, the percentage of all fatalities that occurred within urban areas has slightly increased. It was also found that the percentages of elderly road fatalities (65+ years old) as well as of pedestrians, were much higher inside urban areas than outside. Moreover, the proportion of fatalities at junctions inside urban areas was twice the proportion of fatalities at junctions outside urban areas. The results of the analysis allow for an overall assessment of the road safety levels in European urban areas also in comparison to the remaining road network, providing thus, useful support to decision makers working for the improvement of safety on the European road network.