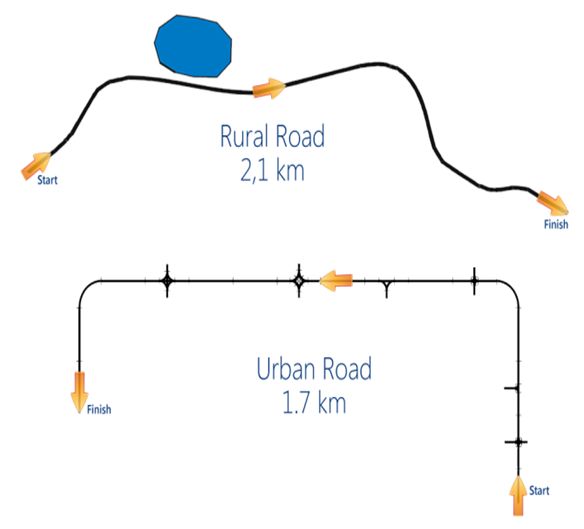 While road accidents constitute a major social problem in modern societies, accounting for more than 1.2 million fatalities worldwide and 25.500 in the European Union in 2015 (WHO, 2016), the relationship between speed and accidents is widely recognized in the road safety community and as such, speed is a commonly used dependent variable in transportation human factors research. Speed has been found to be a major contributory factor in around 10% of all accidents and in around 30% of the fatal accidents (TRB, 1998; OECD, 2006). Both excess speed (exceeding the posted speed limit) and inappropriate speed (faster than the prevailing conditions allow) are important accident causation factors (Aarts and Van Schagen, 2006). Furthermore, a number of speed related measures are often used including, average speed, speed variability, 85th percentile speed, maximum speed (Hogema and van der Horst, 1994; Manser and Hancock, 2007).

In the last decades, driving simulators have been a very common and useful research tool as they allow the examination of a range of driving performance measures in a controlled, relatively realistic and safe driving environment. Within this framework, a large range of test conditions (e.g., night and day, different weather conditions, or road environments) can be implemented in the simulator with relative ease, and these conditions can include hazardous or risky driving situations that would be too difficult or dangerous to generate under real driving conditions such as unexpected incidents and distraction sources (Regan et. al., 2008).

Finally, the present research focuses on the investigation of driving behaviour after an unexpected incident. Based on the literature, when experiencing an unexpected event, the driver temporarily switches from normal driving to compensatory driving actions (Schaap et al., 2008). Workload might play a role in this switch for instance when decisions have to be made or when attention is needed for compensatory behaviour. Moreover, driver characteristics play an important role in driving. Driving style, age and gender might influence how drivers perceive their world, their task and the risk of their actions (Schaap et al., 2008). These characteristics might also influence how drivers react to an unexpected event. Hole (2007) gives an overview of studies reporting differences between men and women and between different age groups.

The objective of the present research is to investigate the effect of an unexpected incident on speed related driving performance measures and more specifically on average speed and on speed variability. Within this framework, a driving simulator experiment was carried out including 12 unexpected events for each participant and the effect of several parameters including driver distraction sources (cell phone use, conversation with passenger), driver characteristics (age, gender, driving experience) and road and traffic characteristics is estimated on the above-mentioned speed related measures (before and after the event) through the implementation of generalized linear mixed models.

The methodological approach of the present research, consists of a driving simulator experiment, in which 95 participants were asked to drive under different types of distraction (no distraction, conversation with passenger, cell phone use) in different road (urban/rural) and traffic conditions (high/low). Each participant aimed to complete 12 different driving trials, while in each trial, 2 unexpected incidents were scheduled to occur at fixed points along the drive (but not at the exact same point in all trials, in order to minimize learning effects). More specifically, incidents in rural area concerned the sudden appearance of an animal (deer or donkey) on the roadway, and incidents in urban areas concerned the sudden appearance of an adult pedestrian or of a child chasing a ball on the roadway.

The above stages were designed on the basis of parameters and criteria shown to be important in the literature, as well as design principles that were appropriate for the research assumptions and objectives of the present research. The driving simulator experiment took place at the special room of the Laboratory of Traffic Engineering of the Department of Transportation Planning and Engineering of the School of Civil Engineering of the National Technical University of Athens (NTUA), where the Driving Simulator is located.

The experiment data storage was performed automatically at the end of each experiment. The simulator recorded data at intervals of 33 milliseconds (ms) which means that each second measured values for each variable 30 times. In order to achieve the objective of the present research, the final database consisted of one line per each event for all participants. Furthermore, the average value of all driving performance measures was estimated for a time period of 30 seconds before and 30 seconds after the event.

Model results indicate the different distraction mechanism between cell phone use and conversation with the passenger which is also highlighted in case of an unexpected incident. More specifically, both regression models are differently explained regarding the distraction sources examined. Drivers while talking on the cell phone exhibit in a higher extent compensatory behaviour after an unexpected incident, because the physical presence of a hand-held phone acts as a reminder to the driver of the potential safety threat posed by the use of the phone. On the other hand while conversing with the passenger, driver has a lower level of compensatory behaviour however his attention is more often diverted from the road. Furthermore, the effect of several driver and road environment characteristics is quantified on the different speeding strategies after an unexpected incident. The present research is essential for policy makers, professionals involved in testing safety systems and those involved in designing and evaluating new driving environments.