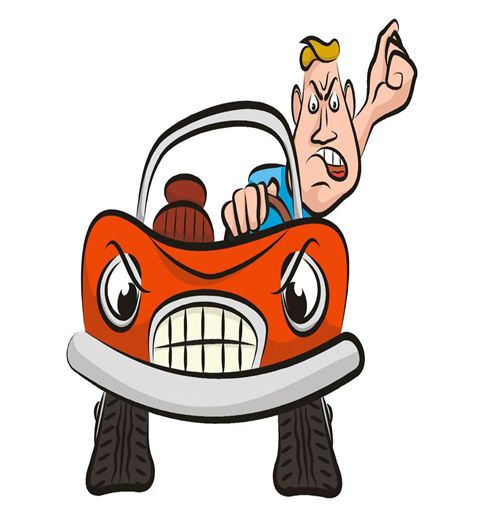 The objective of the present study is to investigate the effect of anger on driver behaviour and safety focusing on certain characteristics of the driver and driving performance parameters. In order to achieve this objective, a driving simulator experiment was carried out, in which 125 participants from all age groups were asked to drive in different road and traffic conditions. Then, each participant filled in a questionnaire about his/her driving habits and behaviour, including a specific section about anger expression during driving and history of accidents. Anger expression was measured by identifying different aspects of emotions and behaviours of the drivers based on the Driving Anger Expression Inventory. First, a preliminary descriptive analysis was carried out in order to acquire insight into the structure of the data. In the next step, in order to reduce the number of independent variables related to anger, a factor analysis was performed, and 4 anger factors were identified namely: External Anger, Forgiveness, Internal Anger, Noble-Mindedness, introducing thus a new way of defining anger levels in an individual. Finally, 5 regression models (linear and logistic) were developed correlating several driving behaviour and performance measures (average speed, average time headway, accident probability, probability of exceeding the speed limit and probability of traffic violation or traffic penalty) with anger factors, other driving parameters as well as driver characteristics. Results indicate that drivers with higher level of driving anger drive faster, at smaller headways from the vehicle in front and are engaged in more accidents and road traffic violations. Notably, male drivers demonstrated higher levels of driving anger than females, while anger was found to decrease as age increases. The conclusions of the present research may enhance understanding of the characteristics and the importance of anger while driving on road safety and be exploited for drafting regulations against driving anger.