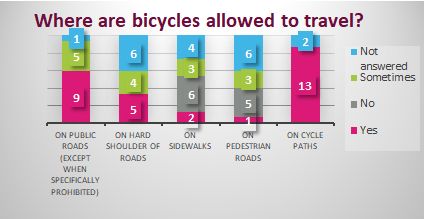 Cycling becomes more and more popular, especially among young people who favor active modes of transport. Drinking and drug use is also more common among young people and affect their capability of driving. The objective of this paper is to present the exploration of cycling under the influence of alcohol and drugs conducted in the framework of the research project titled “Velivr’” through a questionnaire survey among IRTAD Group members and a quantitative survey among cyclists in Paris. Results showed that in many countries safe cycling attracts growing attention but the vulnerability of cyclists is not fully realised. The CUI problem is not appropriately addressed through insufficient enforcement and provision for measures to prevent it. All in all, cycling under the influence of alcohol and/or drugs is a problem growing in parallel with cycling itself.