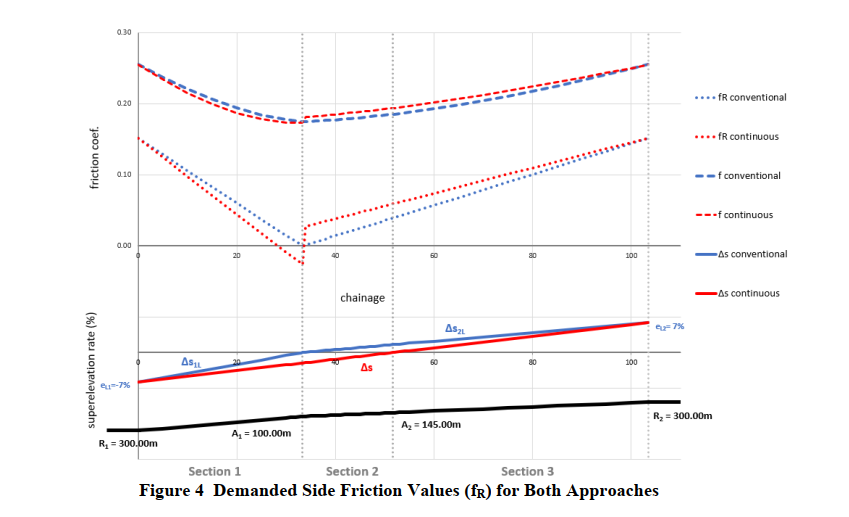 The design of consecutive reverse horizontal curves is a common practice in road design with many environmental and economic benefits. In order the driver to avoid instantaneous lateral acceleration variation during the curvature direction shifting; nearly all design guidelines adopt spiral curves between the opposite turning directions. During the design of such curves, most European road design guidelines treat the spiral curves on both sides of the reverse curvature point (point where end of spiral on first curve concurs with beginning of spiral on second curve), as the boundaries within where the necessary superelevation transition takes place as well. Through this concept, the point with level (horizontal) superelevation rate usually coincides with the point of reverse curvature, thus creating a breakpoint at the superelevation transition when the reverse curves have different either superelevation values or spiral lengths. The paper investigates the impact of utilizing a continuous (linear) superelevation transition between the points where the first circular curve ends and the second circular curve begins. This assessment is carried out by quantifying the safety margins in terms of demanded friction values for both approaches. The investigation was based on the German RAL, 2012 design guidelines, tailored for unfavorable cases of high superelevation demand (sharp curves), through the utilization of an existing vehicle dynamics model. The analysis, revealed that the vehicle undergoes an immediate but rather moderate lateral friction demand variation. However, before introducing the proposed approach in road design practice, there are certain issues that necessitate further research.