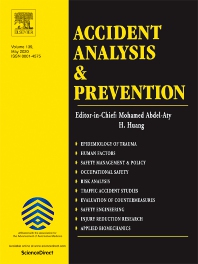 An existing vehicle dynamics model was utilized to define design parameters up to which steady state cornering conditions apply and consequently lift the restrictions of the point mass model. Aiming to assess critical safety concerns in terms of vehicle skidding, the motion of a passenger car was examined over a range of design speed values paired with control design elements from AASHTO 2011 Design Guidelines as well as certain values of poor pavement friction coefficients. Two distinct cases were investigated; the determination of the maximum attainable constant speed (termed as safe speed) at impending skid conditions as well as the case of comfortable curve negotiation where lower constant speed values were utilized. The overall objective was to define the safety margins for each examined case.
From the interaction between road geometry, pavement friction and vehicle characteristics, many interesting findings are reported, where some of them are beyond the confined field of road geometry parameters; such as demanded longitudinal and lateral friction values and horse-power utilization rates. From the road geometry point of view, it was found that control alignments on steep upgrades consisting of low design speed values and combined with poor friction pavements are critical in terms of safety. Such cases should be treated very cautiously through certain actions. These actions include the adoption of acceptable arrangements for the above values regarding new alignments, posted speed management for existing but also scheduling friction improvement programmes more accurately for both cases.