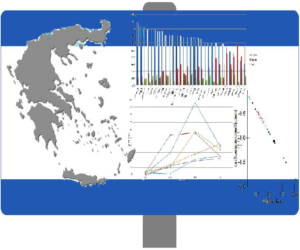 The aim of this Diploma Thesis is the multilevel investigation of road accidents characteristics in Greek cities. For this analysis, a database was developed with road accident data from the Hellenic Statistical Authority in 30 Greek cities for the period 2006-2010, which has been complemented with cities demographic data: population, vehicle fleet, and per capita income. Simple and multilevel, statistical Poisson models were developed and applied. The choice of multilevel modeling was judged necessary, because it lead to the extraction of more complete conclusions. From the results, useful conclusions are deducted for the impact of some of the examined parameters in the number of fatalities, serious and slight injuries in Greek cities, such as existence of median, operation of technical night lighting, accident type, vehicle type, casualty age and vehicle fleet. From the second level analysis it was found that there is significant variation of the impact of the vehicle fleet of each city to the number of casualties in road accidents, which was quantified.