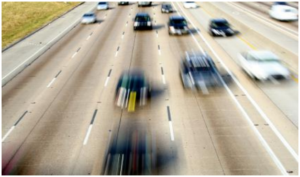 The aim of this thesis is to macroscopically investigate the effect of weather conditions, traffic characteristics and economic crisis to the victims of road accidents in Athens. In order to achieve this, data was collected on a monthly basis for the period 2006-2011 in Attica for victims in road accidents (motorcyclists & pedestrians) including rainfall and temperature, traffic volume and speed in selected arterials and police reports (use of seatbelt and helmet, driving under the influence of alcohol and speed limit violations) and six lognormal regression models were developed. Results show that congestion is statistically significant in every model and speed is statistically significant only in models with severely wounded and dead. Also, it is seen that an increase in temperature and decrease in rainfall increases the victims and especially the seriously injured and the dead. Moreover, influence of speed limit violations and driving under the influence of alcohol is statistically significant. Finally, it is seen that there is a reducing trend in casualties during the economic crisis.