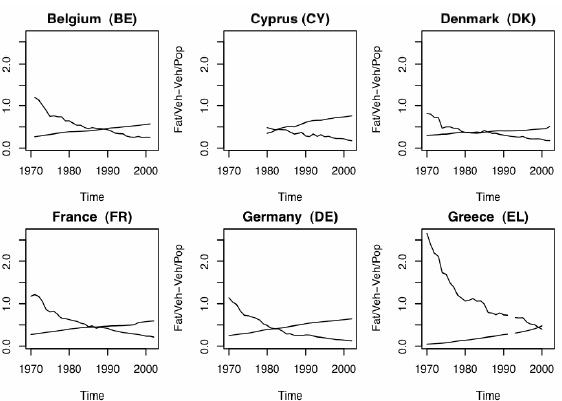 The objective of this paper is to provide a parsimonious model for linking motorization level with the decreasing fatality rates observed across EU countries during the last three decades. Earlier models used to describe the – at the time – increasing relationship between motorization and traffic fatalities were adjusted in order to describe the decreasing relationship observed in the last three decades. A macroscopic analysis of road-safety in Europe at the country level (16 EU countries) is proposed through the application of non-linear models correlating fatalities and vehicles for the period between 1970 and 2002. Given the time series nature of road safety data, these models result in autocorrelated residuals, thus violating at least one of the assumptions of non-linear regression. Autoregressive forms of the considered models that overcome these limitations and provide superior predictive capabilities are also considered. An autoregressive log-transformed model seems to outperform the base autoregressive nonlinear model in this respect. The use of these models allowed for the identification of the best and worst performing countries in terms of traffic fatalities. The proposed models may be proved useful for assessing the road safety performance of the examined countries, as well as for obtaining some insight on the current and future trends of less developed countries.