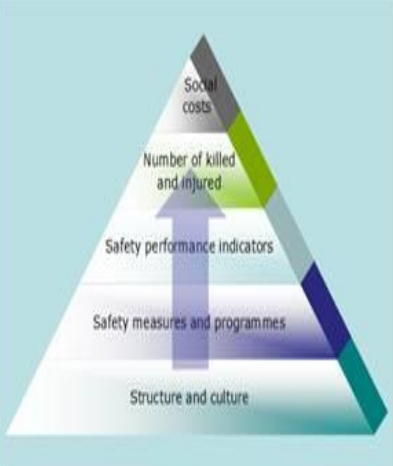 The objective of this research is the analysis of road safety in Greece. For that purpose, the SUNflower footprint methodology is used, in which a country’s road safety level is analysed hierarchically in relation to all components of the road safety system, from structure and culture elements, to the existing programmes and measures, to the performance indicators reflecting the current road safety operational level, to the number of outcomes (i.e. road accidents and casualties) resulting from this road safety level and to the eventual social costs. A wealth of data is gathered and analysed in this framework, including data from the Hellenic Statistical Authority and other national data sources, as well as from various international data files (CARE, ERSO, Eurostat, IRTAD, etc.) and research projects (e.g. SARTRE). The analysis confirmed that Greece is one of the worst performing countries in the European Union in terms of road safety. The yearly social costs of road accidents are estimated to 4 billion Euros. Moreover, Greece is characterised by increased traffic of motorcycles and pedestrians, which is associated with a considerable proportion of total fatalities, summing up to 42%. Greek drivers present aggressive and risk-taking behavior, as well as low compliance to traffic rules. Nevertheless, fatalities have decreased over time, namely by 37% compared to the century start, due to a significant increase of road safety enforcement, a new and stricter Road Code, as well as a large programme of motorway development during the last decade. Finally, the (until recently) lack of a central authority in charge of road safety results in limited efficiency of the implementation of quite a few road safety programmes and measures foreseen at the national strategic plans of the last decade.