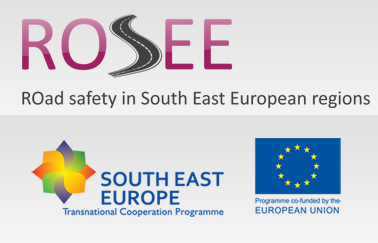 In this paper is given review of the International ROSEE project – Road Safety in South East European Regions, in which together participates ten partners from six countries (Bulgaria, Greece, Italy, Romania, Slovenia and Hungary) and more then ten national and international organizations acting as observers, including representatives from Serbia. The project started in October 2012 and will be completed in September 2014. Goal of the project is to provide support to gevernments at the national and regional level in the selected South-East European regions to improve coordination in promoting, planning and operation of primary and secondary road networks with an emphasis on improving traffic safety performance and network accessibility. ROSEE project (http://www.rosee-project.eu/) is supported by the South East Europe Programme(http://www.southeast-europe.net/en/).