Papadimitriou E., Theofilatos A., Yannis G., “Attitudes and behaviour of European drivers and other road users towards Road Safety”, Proceedings of the 6th International Congress on Transport Research in Greece, Thessaloniki, October 2013. 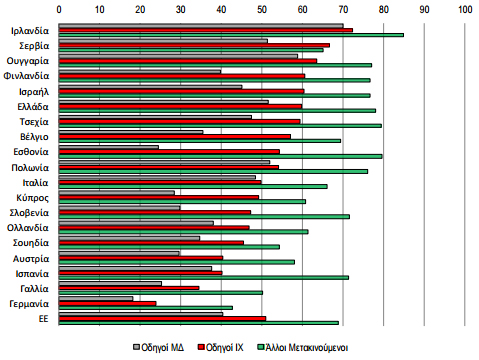 The aim of this paper is to present some of the main findings and conclusions of the SARTRE-4 project which is associated with the attitudes, perception and behaviour of European Drivers and Other Road Users towards road safety. At the pan-European SARTRE-4 survey which took place in 18 European countries and Israel, 21.280 people were participated by means of a questionnaire. In contrast to the former three surveys which focused on car drivers, the latest project involves also power two wheeler drivers as well as other road users such as pedestrians, cyclists and public transport users. Valuable conclusions are extracted in regard to attitudes and perceptions of the public regarding road safety issues, such as speeding, drinking and driving, penalties, measures to improve road safety and changing mode of transport, allowing to comparing the results in different countries. Although road safety performance has improved in 14 out of 16 countries, most car drivers in Europe believe driving over the speed limit is a normal and socially acceptably behaviour, 30% admit to drink-driving in the past month, and over 1 in 4 drive while feeling too tired at the wheel.