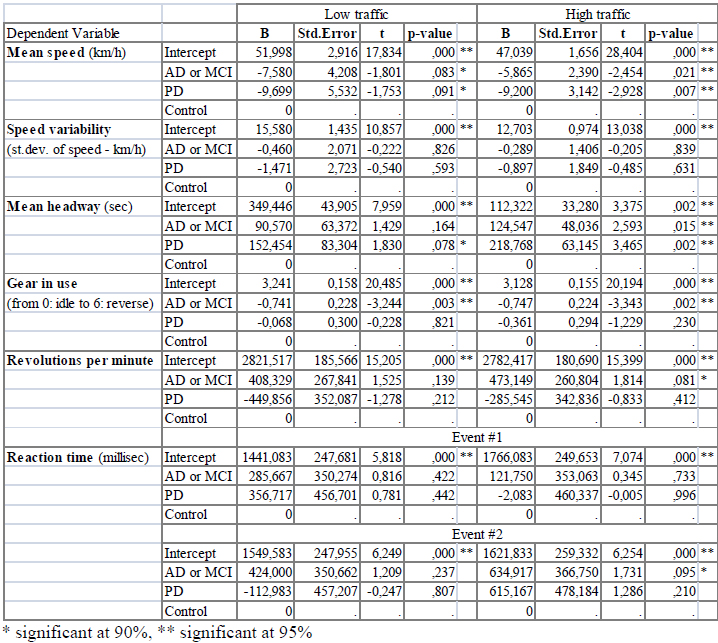 The objective of this research is the analysis of the driving performance of drivers with cerebral diseases on the basis of a driving simulator experiment. The cerebral diseases examined are Alzheimer’s disease (AD), Parkinson’s Disease (PD), and Mild Cognitive Impairment (MCI). A driving simulator experiment is carried out, in which healthy “control” drivers and impaired drivers drive in different driving scenarios, following a thorough neurological and neuropsychological assessment of all participants. The driving scenarios include driving in rural area in low and high traffic volumes. The driving performance of drivers impaired by the examined pathologies is compared to that of healthy controls by means of repeated measures ANOVA techniques. This paper analyses a subset of early results from a smaller sample, while a larger sample will be available from the study in progress. Various driving performance measures are examined, including speed, lateral position, steering angle, headway, reaction time at unexpected events etc., both in terms of their mean values and their variability. The results suggest that cerebral diseases do affect driving performance, and there are common driving patterns for all cerebral diseases, as well as particular characteristics of specific pathologies. More specifically, drivers with cerebral diseases drive at lower speeds and with larger headway compared to healthy drivers, an effect which is more pronounced within PD patients than AD and MCI patients. Moreover, AD and MCI patients appear to have difficulties in driving-related dual tasking, especially as regards the use of the gearbox. On the other hand, PD patients were found to have difficulties in positioning the vehicle on the lane. Cerebral diseases also appear to affect reaction times at incidents.