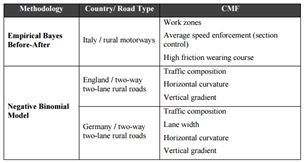 The PRACT Project (Predicting Road ACcidents – a Transferable methodology across Europe) aims todevelop a European accident prediction model structure that could be applied to different Europeanroad networks with proper calibration. An important part of the PRACT project involves the review ofthe recent and salient literature on Crash Modification Factors (CMFs) with the aim of understandingCMF availability and identifying CMF needs in Europe. In addition, a survey of 23 National RoadAuthorities (NRAs) from 20 countries was completed to understand CMF use and CMF needs withinNRAs. The survey identified a number of CMFs that are useful to NRAs but not readily available.Based on both the literature review and the NRA survey, the PRACT project developed some keyCMFs that are currently missing or underrepresented in the literature. CMFs were developed formotorways and 2-way rural roads using data from Italy, England and Germany. A number of CMFswere developed, including for work zones, speed enforcement, high friction wearing course, trafficcomposition, horizontal curvature and vertical gradient. This paper presents a synthesis of CMFavailability and needs based on the survey of NRAs and an extensive review of the literature, andoutlines the development process for CMFs within the PRACT Project.