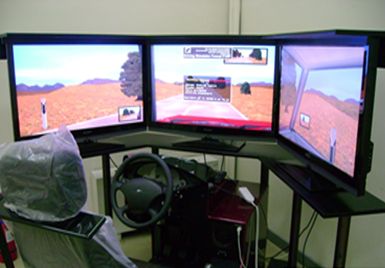 The objective of the present research is to investigate the effect of several risk factors including distraction conditions, driver as well as road environment characteristics on lateral position variability. For this purpose, a large driving simulator experiment was carried out, in which 95 participants from three different age groups were asked to drive under different types of distraction in different road and traffic conditions. To achieve the research objectives, generalized linear mixed models were implemented regarding standard deviation of lateral position as the data used in this research involve repeated observations from each individual trial (each driver completes six drives in rural and six drives in urban environment). Results indicate that several parameters are found to significantly affect lateral position variability including driver characteristics such as gender and age and area type. Regarding distraction cell phone use slightly increased lateral position variability indicating that drivers while talking and holding the cell phone find difficult to maintain the vehicle probably.