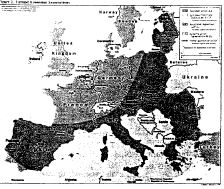 Reaching the EU road safety target (-50% fatalities by 2010) depends directly on the performance of those countries which have the worst road safety record, since this group of states (four Southern and the ten Accession Countries) shows a higher improvement potential than better performing Member States. In the Southern Member States the basic causes of the high casualty record are: increased traffic participation of two-wheel motor vehicles and pedestrians, an inadequate organisation of road safety authorities and a large gap between theory and practice of measures’ implementation. The high casualty record in the Accession Countries can be attributed to an inadequate development of the road traffic environment, limited citizen road safety awareness and a limited road safety budget. However, the two geographic entities considered, as well as the countries within each geographic entity show very different road safety patterns; consequently differentiated policies and measures should be foreseen. The European Union could play a crucial role in this by introducing a series of compulsory tools, such as: nation-wide systematic hazardous location management, road safety audits and inspections; a budget dedicated to road safety actions; independent, reliable and continuous monitoring of safety measures and improvements; and systematic publication of the results achieved by safety measures and other road user awareness raising campaigns.