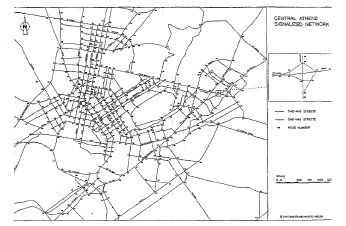 This research deals with the investigation of the advanced driver assistance systems impact on urban traffic network conditions through the use of a traffic network simulation model.  Information obtained through microscopic simulation was used as input to a network traffic simulation and assignment model (SATURN). SATURN was applied to the road network of the greater Athens area in an attempt to investigate the impact of two ADAS systems [variable speed limiter (VSL) and adaptive cruise control (ACC)] for different combinations of flow and market penetration levels.  It was observed that the ADA systems’ impact increases proportionally with the market penetration of these systems and that as traffic flow level increases, the average speed increase becomes smaller (when all other parameters remain unchanged).  Furthermore, it appears that ACC offers better network efficiency results than VSL (up to twice as significant) and the benefits of a combined ACC and VSL system are only marginally better than the ACC system alone.  The proposed methodology and the related findings can support system developers and policy makers in the process of further ADAS development and promotion.