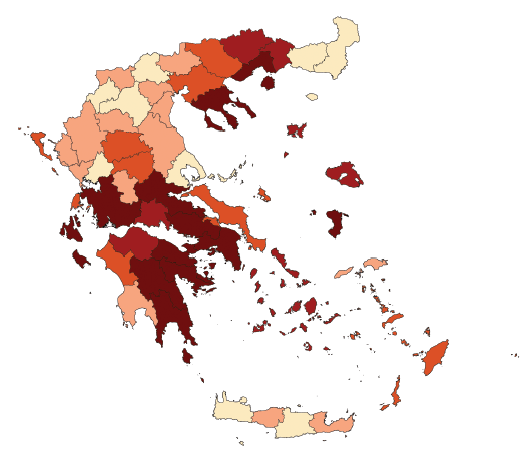 The analysis of spatial dependences among road safety outcomes (road accidents and fatalities) has received increased attention in recent research with interesting findings at national or European level. The objective of this research is the modelling of the spatial variation of road accidents and fatalities in Greece. Greece is selected as a country for which spatial effects have not been previously explored, and also as a country presenting some spatial particularity (i.e. loose spatial structure with many clusters of islands), making such an analysis interesting. For that purpose, NUTS-3 road accident and fatalities risk rates are used for the development of CAR and CAR-convolution spatial models. Moreover, two types of neighbourhood structures of the regional road safety data are tested: a basic structure defined according to the road connections between counties and an extended structure defined on the basis of both road and ferry connections between counties. The results suggest that the basic spatial structure accounts for an important part of the variation in road accident rates in the Greek counties, revealing a pattern of risk increase from northern to southern Greece. Spatial effects are also identifiable when considering the extended spatial structure, however without explaining a larger part of the overall variation compared to the basic structure. Finally, it is shown that the effect of a key explanatory variable of road safety in Greece, namely alcohol enforcement, would have been quite overestimated if spatial effects were not taken into account in the models.