Vardaki S., Yannis G., Pavlou D., Beratis I., Papageorgiou S.G., “Sign recall in a fixed-base simulator as a measure of fitness-to-drive”, Proceedings of the 93rd Annual meeting of the Transportation Research Board, Washington, January 2014. 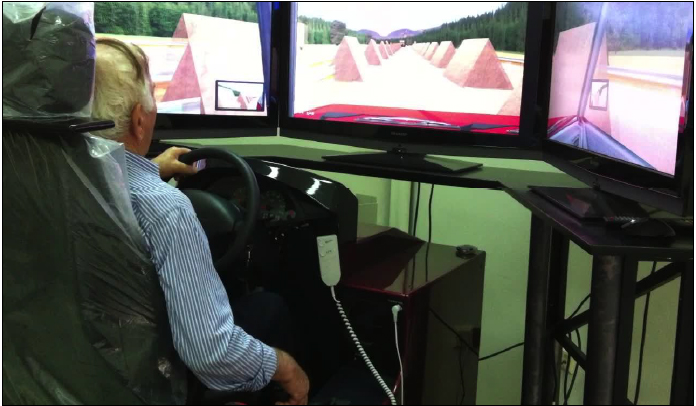 The goals of this pilot study were firstly to provide evidence of whether there are main effects of health status and time elapsed between presentation and recall of sign information as well as interactions between these variables on drivers‘ recall of traffic safety messages; and secondly, in the absence of a main effect of time, to determine whether varying levels of operational and tactical driving task demands would differentially affect healthy versus medically at-risk older drivers in their message recall. Study participants included a ―medically at-risk‖ group of drivers diagnosed with either Parkinson‘s disease or mild cognitive impairment and a control group of drivers with no pathological conditions. Two separate experiments were carried out using a fixed-base driving simulator. In the first experiment it was found that there was a significant main effect of health status on the recall of safety information presented on a sign, with the medically at-risk subjects performing worse than controls; and, that a longer versus shorter delay before message recall had no significant effect on either group. In the second experiment it was found that increasing the level of driving task demand between message presentation and recall resulted in a disproportionally greater drop in recall performance for the medically at-risk group than for the controls, although this effect was not statisticallysignificant; also a statistically significant main effect for task demand was found which had an inverse impact on recall performance across both groups of study participants. Although the conclusions drawn are tentative, they are encouraging with regard to the use of a fixed-base driving simulator to identify performance differences related to medical conditions that have clear implications for fitness-to-drive.