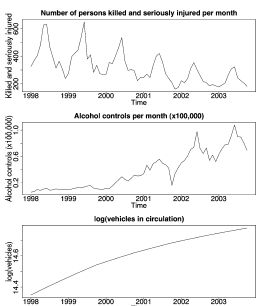 Objective. Road safety data are often in the form of counts and usually temporally correlated. The objective of this research is to investigate the distributional assumptions of road safety data in the presence of temporal correlation.

Methods. Using the generalized linear model framework, four distributional assumptions are considered: normal, Poisson, quasi-Poisson and negative binomial, and appropriate models are estimated. Monthly casualty and police enforcement data from Greece for a period of six years (January 1998–December 2003) have been used. The developed models include sinusoidal latent terms to capture the temporal serial correlation of observations. Several statistical goodness-of-fit diagnostic tests have been performed for the results of the estimated models, and the predictive capabilities of the models are investigated.

Results. The residuals of the quasi-Poisson and negative binomial models do not show any serial correlation. The signs of the estimated coefficients for all models are consistent and intuitive. In particular, a negative coefficient value for the number of breath alcohol controls indicates that the number of persons killed and seriously injured decreases as the intensity of breath alcohol controls increases. The Poisson model fails to capture the overdispersion in the data, thus underestimating the standard errors of the estimated coefficients. Conclusion. The results suggest that the quasi-Poisson and negative binomial outperform the normal and Poisson models in this application. The findings of this research demonstrate a clear link between the intensification of police enforcement and the reduction of traffic accident casualties. In particular, an increase in the number of breath alcohol controls in Greece after 1998 contributed to a reduction in the number of persons killed and seriously injured from traffic accidents.